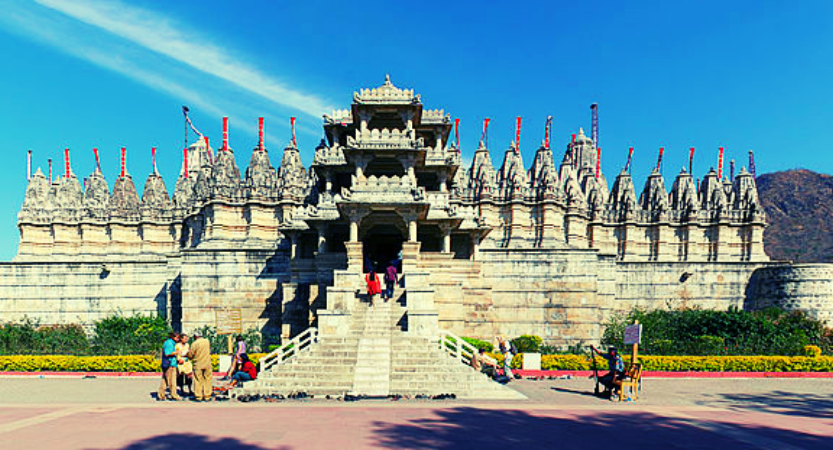 Places of worship hold a special place in everyone’s heart. From children to the elderly, these are the places where you can live in peace and show your devotion. One of the best things about places of worship is that everyone goes there for different reasons. Some go for prayer, some to attain inner peace, some to be in the presence of their god, and some to appreciate the architecture. There is something there for everyone. Ranakpur Jain Temple is a 155 km distance from Jodhpur, So if you want to visit this temple, you can hire a taxi service in Jodhpur and can go to explore this temple.

One such temple that you recommend while visiting Rajasthan is the Ranakpur Jain Temple. It is a Jain temple in Ranakpur, Rajasthan, located near the town of Sadri in Pali district between Udaipur and Jodhpur and is dedicated to the Tirthankara Rishabhanatha. On your trip to Udaipur, you will visit Saheliyon ki Bari, City Palace, and a range of lakes, which also includes the Ranakpur Jain Temple in your Rajasthan tour package.

Ranakpur Jain Temple was built to order by a local businessman named Darna Shah. He wanted to build a beautiful temple after dreaming of a divine vehicle. Many sculptors and artists submitted their designs to Shah but none of them matched the image he had dreamed of. A plan matching his dream was that of an architect named Deepak from Mundara. Deepak was able to create a design as he was impressed by the Shah’s dedication to building this temple. Later, Shah asked King Rana Kumbha for land to build the temple. Not only did he give a huge piece of land to build the temple, but he also asked Deepak to build a city around it. The city built after the king was named Ranakpur and the same city is now known as Ranakpur. The construction of the temple started in the 14th century and lasted till the 15th century.

There are a total of 5 temples in India that are considered to be the most sacred for Jains. One of them is Ranakpur Jain Temple. Others on the list are the Dilwara Temple in Mount Abu, Rajasthan; Khajuraho Temple in Khajuraho, Madhya Pradesh; Palitana Temple in Shatrunjay Hills, Gujarat; and Gomateshwara Temple at Shravanabelagola, Karnataka.

Ranakpur Temple is one of the recommended places to visit when you are visiting Rajasthan. It is also known as Charturmukh Dharana Vihara and is dedicated to Tirthankara Rishabhanatha who was the first Tirthankara of Jainism, who also founded the Ikshvaku dynasty.

The Jain temple complex of Ranakpur consists of 5 temples.

Built in the 15th-century using white marble, it is the most popular temple in the complex and honours Adinath, also known as Rishabhanatha. It gets its name from its 4-faced design. The temple is spread over 48,000 square feet and is known for its intricately and beautifully carved 1444 pillars, 426 pillars, 89 domes and 29 halls. Interestingly, one of these pillars is incomplete. There is a legend about the temple that a pillar is destined to be incomplete. Whenever it is completed, it is broken the very next day. The 1444 pillars supporting the temple are carved with exquisite detail which is almost impossible even today.

One of the most attractive features of the temple, apart from the pillars, is the beautifully carved idol of Parshvanath. It is made from a single slab of marble. Its beauty in detail is due to the carefully crafted 1008 snakes around the idol. The same idol also has two chauri bears and a yaksha and a yakshi, who are half-human and half-snake. Two elephants are also carved, one on either side, which seem to purify Parshvanath. And you can’t find the end of these elephants’ tails.

The construction of this Sun temple dates back to the 13th century, 2 centuries before the construction of the Ranakpur Jain temple. But it was desecrated during times of unrest due to repeated attacks and was later rebuilt along with the rest of the temple complex.

There are two branches of Jainism, Shvetambara and Digambara, which are named after two deities. Shvetambara means “white-clad”. Sannyasis of this branch of Jainism wear white clothes. The other branch is Digambara which means “sky-clad”. The ascetics of this branch practice nudity. The Seth ki Bari temple in the complex is dedicated to the Shwetambar god and is popular for the exquisite murals on its walls.

So when you are looking for places to visit in Rajasthan, Ranakpur Jain Temple should be on your list.

When you are visiting Ranakpur or its nearby areas like Jodhpur and Udaipur, it is recommended that you visit in winter. The weather is pleasant at that time and you can spend your time exploring the temple properly. The timing of Ranakpur temple is from 12 noon to 5 pm. There is no entry fee but the priest who will be your guide in the temple will ask for donations for the time spent. And because it is a temple, be fully or semi-covered in your clothing.

Apart from this, there are many other beautiful temples around. You must also visit Parshuram Mahadev Temple located in Desuri Tehsil in Pali. There is a Golden Temple in Falna, 36 km from Ranakpur in Rajasthan. Another temple on the way from Falna to Sanderao is the Nath Mahadev Temple of Nimbo. These are all magnificent temples that you must visit.

And if you want to go a little farther, of course, Udaipur and Jodhpur are where you can go and from Jodhpur, you can hire a taxi rental in Jodhpur. A little further from Udaipur is Mount Abu where the Dilwara Jain Temple is located. Now that’s not a great itinerary!