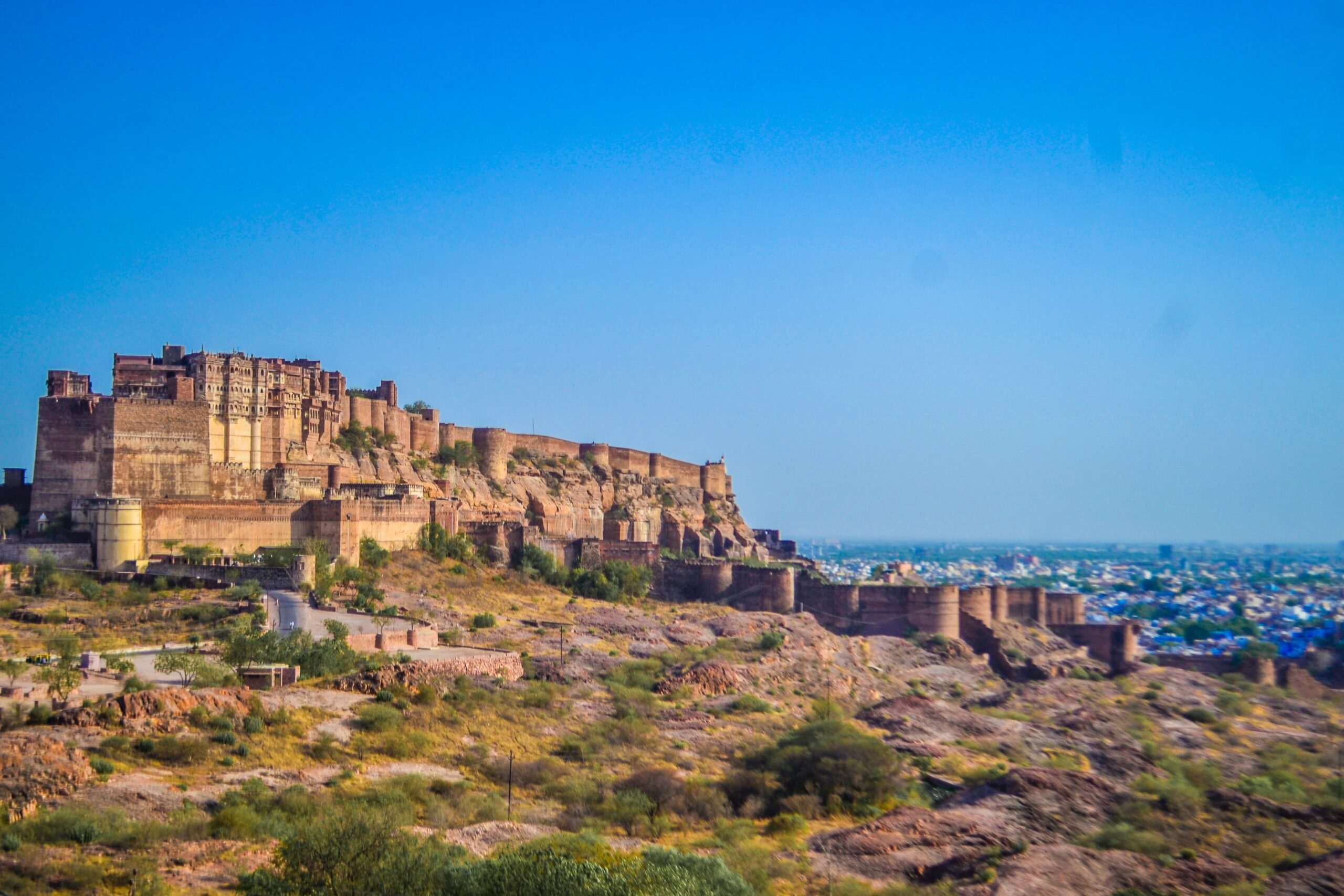 Every traveller who has ever been to Jodhpur knows that the presence of the golden Mehrangarh Fort amidst a sea of ​​blue houses of indigo is enough to make anyone go gaga.

This massive structure (famous as the largest of all forts in Rajasthan and India) guards the borders of what we know as the blue puzzle of every Rajasthan adventure.

But what lies behind the fortified walls of this building still remains a mystery to travellers around the world.

Let us unveil the treasures of this fort so that you can go about your road trip to Jodhpur. You can go to Mehrangarh Fort by hiring a taxi rental in Jodhpur.

The foundation of this fort was laid by Rao Jodha in the middle of the 15th century. At that time Rao Jodha was the ruler of Marwar.

He shifted his then capital Mandore to Jodhpur (about 9 km north) for security reasons.

However, he was not the only one behind this architectural masterpiece.

In fact, most of the work on the fort was completed during the reign of Jaswant Singh Rathore during the 17th century (200 years after the start of the construction of the fort).

Like the fort, the various palaces inside this structure are also 500 years old. However, as we told you earlier, the construction of this fort was not completed in one go.

It actually went through three phases:

Mehrangarh gets its name from the sun god ‘Mihir’ who holds an auspicious place in the beliefs of the Rathor rulers.

However, with the pronunciation conventions of Rajasthan ‘Mihir Garh’ became Mehrangarh.

Fable (The Story of Mehrangarh Fort)

The history of Mehrangarh Fort also tells about a spiritual legend that may or may not be a cure for the ears.

According to this, the hill (then known as Bhakurcheria (mountain of birds)) on which the Mehrangarh Fort is built was earlier the home of a monk, Cheeria Nathji.

Rao Jodha requested his displacement elsewhere for the construction of the fort. Nathji refused his request.

Thus, a rift starts between them. Karni Mata, another powerful female warrior sage, came to the king’s rescue until Chiriya Nathji decided to leave her abode.

However, while leaving, he cursed the city to always be in water scarcity.

Shocked and frightened by the curse, the king begged for forgiveness and even promised to build a temple in the fort.

However, the curse could not be revoked. Therefore, Nathaji suggested that only a selfless sacrifice such as burying a person alive can reverse the curse.

Later that evening, a man named Rajaram Meghwal volunteered to be buried alive to save the city of Jodhpur from this curse.

The exterior of Mehrangarh Fort:

The city of Jodhpur flourishes around the fort, which has been the abode of the Rathores for more than 5 centuries.

The fort is situated on a hill so that it looks like it has risen from the earth.

Generations of the royal family lived in the Mehrangarh Fort, and it is commendable how the fort has withstood all the hardships and wars through the sands of time.

gate:
You have to go through a series of seven gates to enter the fort. Among them, the following are the most discussed:

Jai Pol is a victory gate celebrating the victory of Maharaja Man Singh over the armies of Jaipur and Bikaner in 1806.
Often called the main gate, in the past the function of this gate was only that of the outer rear door.

Jai Pol is where you will buy tickets to enter this royal wonderland.

Today, visitors hardly use the original main gate. And, the popular route actually bypasses it if you plan to reach here by road. *

“Insider’s Tip: The most popular way to explore Mehrangarh is to climb up to the highest level of the fort by a lift and then descend to see all of its attractions. However, if you’re not on time, and on the steep slopes are suitable for climbing, we would recommend you to try and travel on foot to enjoy all the little details.”

The next gate is Fateh Pol. This gate is another victory gate that celebrates the ruler’s victory over the Mughals around 1707.
catch your breath! This next sight is worth seeing. Dedh Kangra Pol is one such gate of the Mehrangarh Fort, which still bears the imprint of the cannonball bombardment.
The Loha Pol is the last gate and your ticket to the main part of the fort complex.
Now, when you will reach this gate you will see some handprints on the right side of the gate.

Just to pique your curiosity, let us tell you that these handprints testify to a medieval social evil that expected women to end their lives after the death of their husbands.

These marks are of the wives of Maharaja Man Singh, who burnt themselves on the pyre of their husbands.

As soon as you enter the last door, you will feel as if you have turned back time. The splendor, beauty, grandeur of that era will help you portray the history in as graphic a way as possible. Thanks to all the artists and galleries that are on display here.

Now let’s talk about the place which is the treasure of this fort: Mehrangarh Museum.

The Mehrangarh Museum has seven period rooms and six galleries.

Darpan Mahal or Sheesh Mahal was the bedroom of Maharaja Ajit Singh during his reign. As the name suggests, it is a palace decorated with mirrors and shiny objects.

As you can see in the picture, below the mirror arches are painted gesso panels of sacred Hindu subjects.

On a panel the Hindu deities including Brahma, Shiva including Parvati, Devi, Krishna and Ganesha are all seated on a throne.

However, on other panels, there are images of Lord Krishna playing the flute and lifting the Govardhan mountain.

In addition, this room also displays scenes from various Hindu epics with gesso panels. Let’s see how many people you can spot on your trip there.

Darpan Mahal or Sheesh Mahal was the bedroom of Maharaja Ajit Singh during his reign. As the name suggests, it is a palace decorated with mirrors and shiny objects.

As you can see in the picture, below the mirror arches are painted gesso panels of sacred Hindu subjects.

On a panel the Hindu deities including Brahma, Shiva including Parvati, Devi, Krishna and Ganesha are all seated on a throne.

However, on other panels, there are images of Lord Krishna playing the flute and lifting the Govardhan mountain.

In addition, this room also displays scenes from various Hindu epics with gesso panels. Let’s see how many people you can spot on your trip there.

Maharaja Takht Singh ruled Jodhpur in the 19th century and this palace was his residence.

Marked with remarkable interiors, the Takht Niwas is an unusually large area with no supporting pillars in the center.

Every inch of this room, including the floor, is tinted. The windows of this room are covered with colored glass, which give an eerie light to the room.

This room is strategically placed to get amazing views of the forts and the blue city of Jodhpur. While you are here do not miss to click some amazing panoramas of the city.

Mehrangarh_Fort_Guide_Janki_Mahal_1
This palace is located on the upper floor in the North Wing.

Earlier this room was used by the royal ladies to participate in the activities of the courtyard from afar. Thus, it was named as Jhanki Mahal.

This room is a showcase of the infant cradle that was built decades later for newborns of the royal bloodline. Get ready to be amazed by the grandeur of these cradles.

If you have already fallen in love with the intricate latticework of the fort, then we are sure you will love the next part of this fort.

Known as the most beautiful corner of the fort, Janana Devadi is a small courtyard surrounded by the most exquisite jaali work.

Being the oldest part of the complex, you can actually see the intricacy in the work of ancient artisans on a tour of this yellow sandstone building.

Finished with an amalgamation of lime plaster and finely crushed shells, the Moti Mahal or the White Mahal shines with a pearlescent sheen.

In medieval times, this room served as a court for the king, his court and subjects.

While exploring this room, you will find five deep alcoves on the far side.

To many it may seem like an architectural addition, however, these alcoves then had secret balconies.

What is the purpose you ask? Well, they were used by queens to hear court proceedings.

How to see Mehrangarh Fort?

From the Jodhpur railway station or Jodhpur airport, you can hire a Jodhpur taxi and can go to explore the Mehrangarh Fort.