6 Facts You Don’t Know About Mehrangarh Fort In Jodhpur 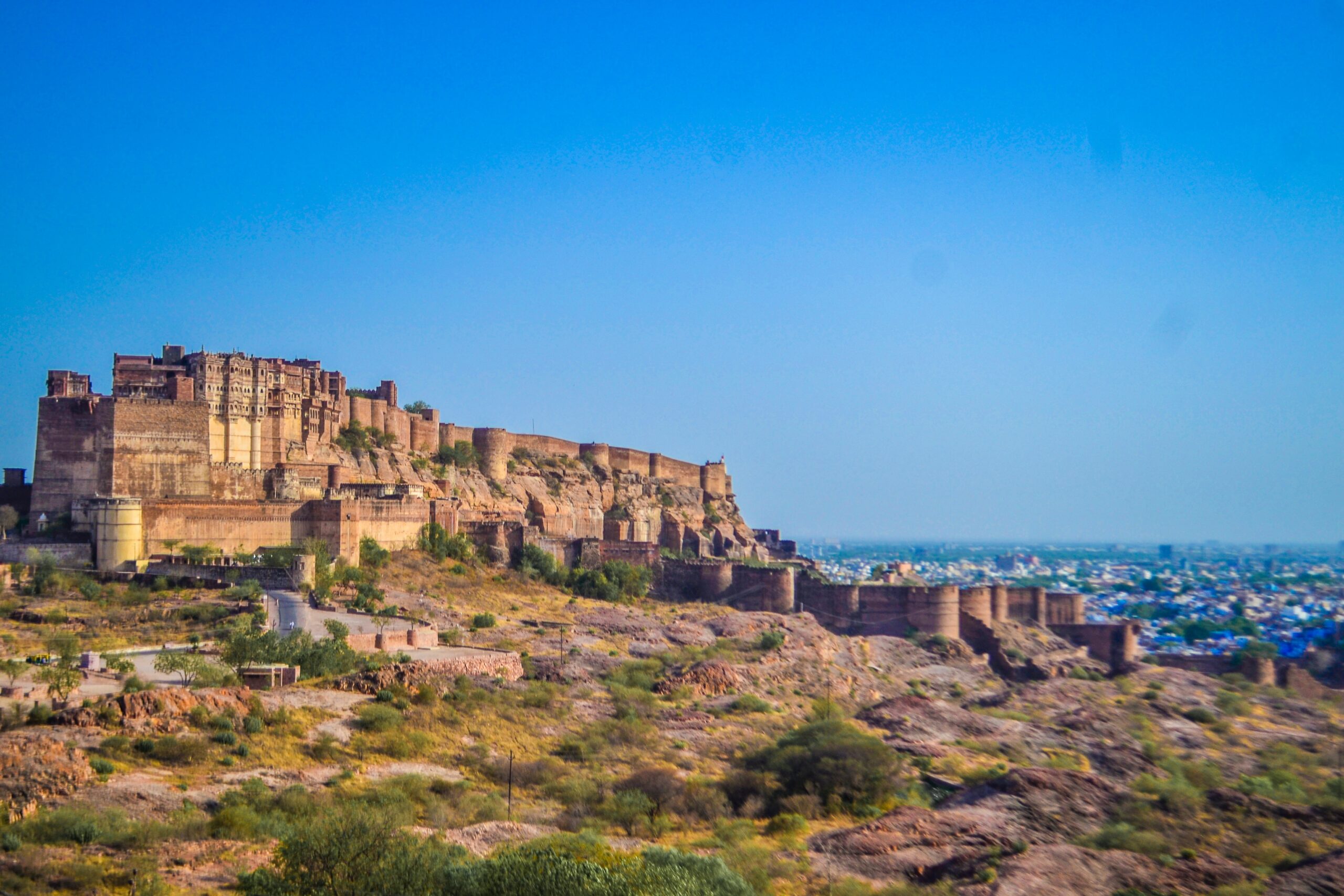 Mehrangarh Fort is known for its beautiful architecture, but there are some history and legends which are not very famous.

Mehrangarh, known for its beautiful architecture, formidable walls, and cultural heritage, is one of the most magnificent forts in Rajasthan, India. It is no exaggeration in Rudyard Kipling to describe the fort as “a palace which may have been built by the Titans and painted by the morning sun”.

Perched on a rocky cliff at a height of 400 meters above the city skyline, the fort can be seen from almost any vantage point in Jodhpur. If you want to visit this fort hire a Jodhpur taxi and go to explore this fort.

Much has been written and said about the grandeur of Mehrangarh Fort. Ornate red sandstone carvings of Shringar Chowk, Gallery of paintings, Ornate palanquins in Daulat Khana, Intricate mirror work in Sheesh Mahal, Exquisite gold paintings of Phool Mahal, Grand interiors of Takht Niwas, Jharokha of Jhanki Mahal and Brahmanical blue houses around the fort.

I want to give all this a pass and present you with some very interesting and relatively unknown facts about the fort that will spark your curiosity.

How Mehrangarh Fort got its name

Mehrangarh Fort- The fort of the Sun God is named after Mehr-Garh. Mehr means sun and Garh mean fort. Surya has been the main deity of the Rathore dynasty. It is believed that the Rathores are descendants of Surya. According to the pronunciation in the local language, Mehr-Garh came to be known as Mehrangarh.

The land on which it stands

The Mehrangarh Fort is built on a Malani Igneous Suite contact that represents the last phase of Precambrian age igneous activity in the Indian subcontinent. This unique feature has been declared a National Geological Monument by the Geological Survey of India.

Although the fort was originally constructed by Rao Jodha, the founder of Jodhpur, in the mid-15th century, it was expanded over 500 years by his descendants with several palaces and structures. Most of the fort that stands today dates back to the 17th century and was built by Maharaja Ajit Singh.

Sitting on a rock

During the initial days, the city of Jodhpur was contained within the four walls of the fort. However, within 50 years of the construction of the fort, Jodhpur had grown in size as people migrated from different regions of the Thar. There are 7 gates on the majestic fort namely Jai Pol, Loha Pol, Fateh Pol, Amrita Pol, Dudkangra Pol, Gopal Pol, and Bheru Pol.

The fort is situated on a steep rock called Bakhurcheria which is 400 meters high from the skyline of Jodhpur and is spread over 5 km. The walls of Mehrangarh are 36 meters high and 21 meters wide and protect some of the most beautiful and historical palaces of Rajasthan.

Story of a curse

According to a legend, for the construction of the fort, Rao Jodha had to displace the only human inhabitant of the hill, a sadhu named Chiriya Nathji, the lord of birds. Tired of being forced to move, Chiriya Nathji cursed Rao Jodha that there would be a shortage of water in the fort. Rao Jodha succeeded in appeasing the hermit by building a house and a temple in the fort near the cave, which was used by the monk for meditation, although only to the extent that even today this area is every 3 to 4 years. plagued by drought.

To avert the consequences of Cheeriya Nathji’s curse, Rao Jodha buried a young man named Razia Bambi alive to ensure that the new fort turned out to be favorable. In return, Razia Bambi was promised that Rathore would look after her family and descendants. In honor of the promise, even today Razia’s descendants have a special relationship with the Maharaja family.

Towards the edge of Bakhurcheria hill is the Rao Jodha Desert Park which comprises 72 hectares of ecologically restored vegetation of arid and desert land. The area around the desert park includes many volcanic rocks and sandstone formations from about 600 million years ago. The park also has a visitors gallery, cafe, and a native plant nursery. While strolling through the park, you can spot some of the local birds, butterflies, and reptiles, while learning more about the flora and fauna of the desert.

One thing that differentiates Mehrangarh from the rest of the forts of Rajasthan is the preservation of folk art and traditions. Cultural and folk performances are organized every day in different courtyards of the fort. It is a visual treat to watch various artists in the most colorful and exquisite costumes dance and perform on various Rajasthani folk songs, while the elaborate carvings on the walls of the courtyard make for an excellent backdrop. To believe it, you need to see it.

From the Railway station or airport, you can hire a taxi service in Jodhpur and then go to explore this Mehrangarh Fort in Jodhpur.